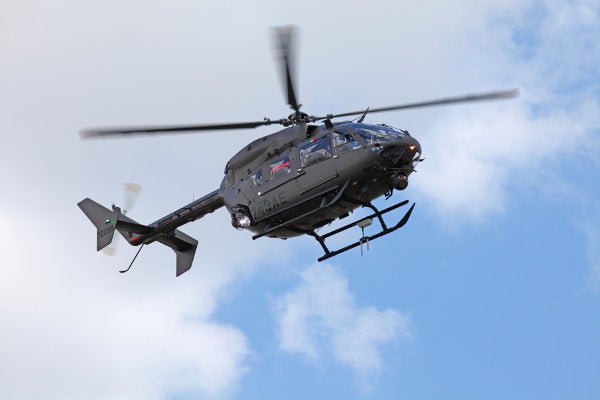 EADS North America has been awarded a contract option for delivery of additional UH-72A Lakota light utility helicopters (LUHs) to the US Army.

Valued at $181.8m, the contract covers supply of an additional 34 helicopters, along with eight engine inlet barrier filter kits to the army, and brings the total Lakotas ordered to date by the service to 312.

Utility Helicopters project manager colonel Thomas Todd said: "The Lakota programme is an example of a successful programme that is meeting the army’s needs by complying with the army and OSD goals for an ACAT-1 high performing programme."

Out of the total 37 helicopters, 24 will be equipped with the Security and Support (S&S) Battalion mission equipment package (MEP), which was ordered through a separate contract action.

Featuring a moving map, EO/IR sensor and digital video recording capability, the MEP-integrated helicopters are operated by the US Army National Guard units to support law enforcement and federal homeland security agencies in responding to natural disasters and border security operations across the US.

“The Lakota programme is meeting the army’s needs by complying with the goals for an ACAT-1 high-performing programme.”

In addition to replacing the army’s ageing OH-58 and UH-1 rotary-wing aircraft, the Lakotas are also expected to simultaneously allow UH-60 Black Hawks to participate in combat missions.

The US Army is planning to procure a total of 345 UH-72As under a defence acquisition category (ACAT) I programme that will continue through to 2016, and has received 243 Lakotas from EADS to date.

Deliveries under the new contract are scheduled to start in September 2013.