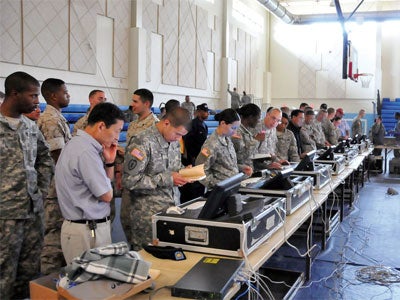 STG has secured a contract for delivery of support services for the US Army’s non-combatant evacuation operation (NEO) tracking system.

Services provided by the company are scheduled to help the Eighth Army in supporting the operations, maintenance, and sustainment of the NEO tracking system over the next two years.

”The importance of the NEO tracking system’s readiness is a real world mission to support personnel and families displaced and affected by tragic events,” Phoebus said.

"The importance of the NEO tracking system’s readiness is a real world mission to support personnel and families displaced and affected by tragic events."

STG chairman and CEO Simon Lee said the ongoing events on the Korean peninsula demonstrate the need for the NEO tracking system even more .

”Growth in the pacific theater of operations has been a long-time goal of STG. This partnership with the Eighth Army succeeds in assuring we are part of fully supporting their fight tonight mission,” Lee said.

An automated data processing hardware and software package, the NEO tracking system is designed to help combatant commanders and joint force commanders in the maintenance of visibility and accountability of non-combatant evacuees, as they advance through the evacuation pipeline.

NEOs are generally conducted to rescue US citizens, Department of Defense (DoD) civilian personnel and other designated host nation and third country nationals, in response to hostile attacks and also in anticipation of any natural or man-made disaster.

Image: eight army personnel learn to use the NEO tracking system. Photo: courtesy of US Army.