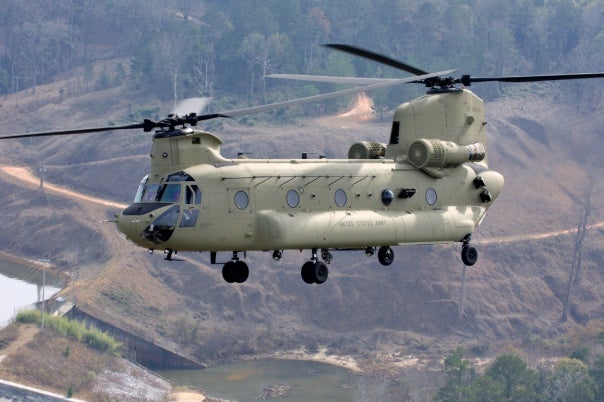 Boeing has been awarded a $4bn contract for delivery of 177 CH-47F Chinook medium-to-heavy-lift helicopters to the US Army.

Representing a cost-effective alternative to the annual contracts, the multi-year contract also features options, which if exercised by army could increase the total number of aircraft to 215.

Expected to help the US Government save more than $800m, the contract also eventually brings the army’s CH-47F total procurement close to its intended target of 464 aircraft, including 24 units for replacement of peacetime attrition aircraft.

"The most important benefit is the continued support these aircraft will provide to soldiers in the field and civilians in distress," Barrie added.

Boeing Cargo Helicopter Programmes vice-president Chuck Dabundo said the army would benefit not only from the efficiencies of a multi-year contract but also from the production efficiency gains achieved by the company and its suppliers.

”That includes the $130m investment we made to modernise the Chinook factory," Dabundo said.

"The most important benefit is the continued support these aircraft will provide to soldiers in the field and civilians in distress."

"This contract will enable Boeing and our partners and suppliers in 45 states to bring stability to the workforce and to invest in production tooling, processes and other capital improvements."

Around 241 CH-47F-model aircraft are currently in service with 15 army active duty and National Guard units, while a 16th is presently being equipped.

Extensively used for US Army’s air assault, transport, and medical evacuation and support missions in Afghanistan, the helicopter also serves as backbone of combat, logistics and humanitarian operations for 18 other operators worldwide.

Contract deliveries are scheduled to start in 2015.

Image: A US Army’s CH-47F Chinook helicopter during its flight. Photo: courtesy of US Army.