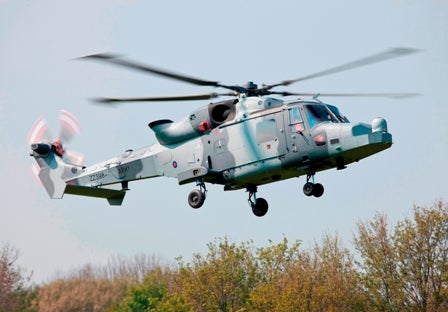 The UK Ministry of Defence (MoD) has taken delivery of two AW159 Wildcat Lynx helicopters from AgustaWestland at the 2012 Farnborough International Airshow this week in the UK.

During the official unveiling of the first helicopter, the UK defence secretary Philip Hammond also confirmed a £250m AW159 Wildcat integrated support and training (WIST) contract to the company, for the delivery of support and training services for the Army and Royal Navy’s helicopter fleet throughout its operational life.

Commenting about the helicopters, Hammond said that the Wildcat represented an improvement on the existing Lynx helicopters.

"These helicopters will be a key part of the future equipment programme for the Armed Forces that will see £160bn spent over the next ten years," Hammond said. "By balancing the budget, we can deliver the airframes and the millions of pounds of support they require."

Under the terms of the new contract, the company will deliver a specialist training centre, consisting of flight simulators and a wide range of other equipment to train pilots, as well as ground crew and engineers at the Royal Naval Air Station Yeovilton, in south-west England, where the helicopters will be based.

A total of 62 helicopters, which includes 34 army Wildcats and 28 maritime attack variants, were ordered by the MoD from AgustaWestland in December 2008 to conduct reconnaissance missions around the world.

“These helicopters will be a key part of the future equipment programme for the Armed Forces that will see £160bn spent over the next ten years.”

The Wildcats will be delivered to The British Army to help replace the Lynx helicopter fleet, operated by the Army Air Corps and Fleet Air Arm, from 2014.

The Naval Wildcat variant has already completed extensive sea trials aboard Royal Navy’s Type 23 frigate HMS Iron Duke in February 2012, and is scheduled for delivery in 2015.

Defense and Civil Spends on Helicopters in the United Kingdom: 2016 to 2024

The Military Aviation Market in the United Kingdom to 2024: Market Brief