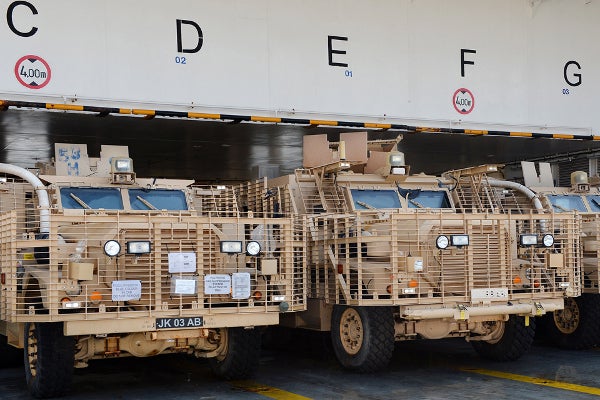 Around 100 UK military vehicles from Afghanistan have arrived at Marchwood Sea Mounting Centre, near Southampton, as the country prepares to end its combat mission by December 2014.

Comprising of 18 Mastiff and more than 30 Jackal protected patrol vehicles, the new vehicles bring the total number redeployed from theatre to date to more than 1,000, and will be transferred to Herrick exchange point facility at Warminster, to achieve ready-to-issue to units standard for future use.

Britain has so far redeployed over 1,080 vehicles and pieces of major equipment, along with 1,570 containers of materiel that have been shipped to Afghanistan over the past 12 years, back to the UK.

Terming redeployment of equipment from Afghanistan a major logistical challenge, UK defence secretary Philip Hammond expressed confidence that the military planners are up to the task and are on schedule to bring home the broad spectrum of deployed equipment.

"The drawdown of equipment will not compromise our mission in Afghanistan."

”Our troops will be resourced properly to the end of operations and the drawdown of equipment will not compromise our mission in Afghanistan,” Hammond said.

”We can only achieve this redeployment because of the successful transition of security control from British forces to Afghan forces, which are increasingly capable and professional. These forces have stepped up in the fight against the insurgency throughout this summer and now lead on security throughout the country.”

Approximately 3,345 vehicles or items of equipment and 5,500 containers of materiel are scheduled to be returned to the country under the current plans, before the military draws down from Afghanistan.

The UK armoured vehicles are either being flown from Camp Bastion in Helmand province, or moved overland through Pakistan to a sea port in some cases, prior to loading onto a ferry for return to home.

The Military Aircraft Market in the UK to 2025: Market Brief