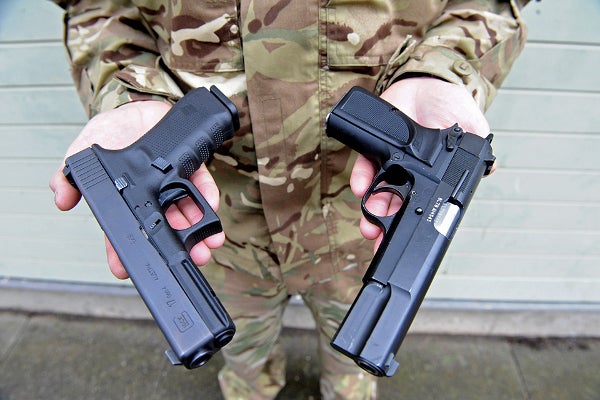 The UK Ministry of Defence (MoD) has awarded a contract to Viking Arms to deliver 25,000 new Glock17 Gen4 pistols for the country’s armed forces.

The replacement pistol contract follows a tender that was issued two years ago.

UK Defence Equipment, Support and Technology Minister Philip Dunne said: "We are determined to provide our troops with the best possible personal kit available and these new Glock 17s will give them greater firepower and accuracy on operations."

Produced to replace the ageing Browning L9A1 pistols currently in service, the new 9mm-calibre Glock is more accurate and lighter, with increased magazine capacity of 17 rounds compared with the existing gun.

Scheduled to be first deployed with troops operating in Afghanistan, the new pistol will be delivered to personnel working in all three military services in the next few weeks.

"Pistols are vital in close-combat and are a key part of a soldier’s armoury."

Commenting on the new weapon after conducting trials, Royal Marines warrant officer class 1 Mark Anderson said: "Pistols are vital in close-combat and are a key part of a soldier’s armoury. Reliable, light and easy-to-carry, the Glock inspires confidence and performs exceptionally well."

Manufactured in Austria, the new Glock sidearms will serve as a complement to an array of weapons used by the forces, including 5.56mm round SA80A2 assault rifles and light machine guns, 7.62mm round Sharpshooter rifles and general purpose machine guns as well as 12-gauge cartridges combat shotguns, and 8.59mm round sniper systems.

The Browning guns have been in use with the UK armed forces for more than 40 years and require high maintenance services.