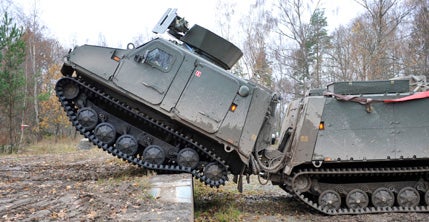 Enström was reported by Örnsköldsviks Allehanda as saying that the additional vehicles will be acquired at the cost of £100m by exercising options under the January 2012 contract signed between the company and the Swedish Defence Materiel Administration (FMV) for delivery of 48 BvS10 vehicles for use in Afghanistan.

"It is capable of operating in extreme temperatures ranging from -46°C to 49°C."

A further development of the Bv206S armoured vehicle, the BvS10 is an armoured all-terrain tracked carrier, designed to provide all-round crew protection against small-calibre munitions, rocket-propelled grenades and anti-tank mines during combat operations.

Depending upon the variant, the vehicle is equipped with either a 12.7mm or 7.62mm-calibre machine gun for self-defence and can accommodate 11 future infantry soldier system (FELIN)-equipped soldiers along with their individual squad weapons and equipment.

Capable of operating in extreme temperatures ranging from -46°C to 49°C, the C-130 Hercules and C-17 Globemaster III transportable vehicle is also in service with the Dutch, French and British armed forces.

The vehicles will be manufactured at the company’s production facility in Ornskoldsvik, Sweden, while deliveries will begin following completion of the previous contract’s shipments in November 2013 and will run through 2016.