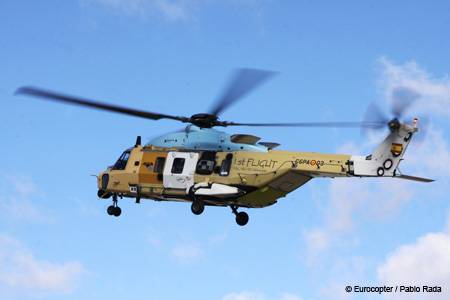 The helicopter is one of two NH90 GSPA prototypes manufactured in Marignane, France, under a contract signed by the Spanish Ministry of Defence (MoD) in December 2006 for a total of 45 NH90 TTHs.

Currently, the Spanish version prototypes are undergoing testing and certification.

Sponsored by the Spanish Secretariat of Defence through the Directorate-General of Armament and Equipment (DGAM), the programme has been set out to deliver the NH90 helicopter to all three branches of the Spanish armed forces.

Eurocopter España’s site in Albacete will provide complete support from the design stage through to flight testing and certification, component manufacture, the final assembly line and integration for the helicopters.

"The programme has been set out to deliver the NH90 helicopter to all three branches of the Spanish armed forces."

NH Industries, a joint venture between AgustaWestland, Eurocopter and Stork Fokker, is the prime contractor for the twin-engine multi-role helicopter programme.

The company is also manufacturing a second variant, the NATO frigate helicopter (NFH) for naval forces.

In addition, the helicopters have been ordered by NH90 members, including France, Australia, Belgium, Greece, Norway, Oman, Sweden, Finland and Italy.