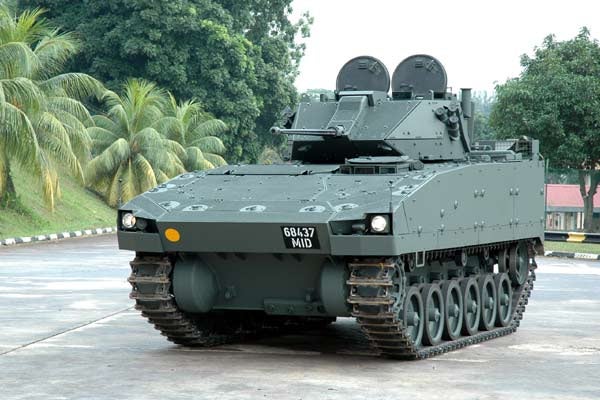 Scheduled to be completed on 21 May, the drill involves the participation of more than 1,300 personnel from the 48th Battalion, Singapore Armoured Regiment (48 SAR) and Bundeswehr’s 33rd Panzer Battalion, as well as 14 Leopard 2SG main battle tanks (MBTs) and 11 Bionix II infantry fighting vehicles.

XPS 2013, the fifth in the series, also features a four-phase live-firing manoeuvre involving eight of SAF’s Leopard 2SG MBTs and Bundeswehr’s four Leopard 2A6 MBTs, during which participants work in a closely coordinated manner to defeat hostile forces.

48 SAR 2nd Company commanding officer major Lim Han Yong said the exercise plays a significant role in ensuring that the battalion is ready to perform operational duties, and provides personnel with the opportunity to practice firing on the move on a moving target, which is not possible in Singapore due to space limitations.

"In Singapore, 800m is the maximum range at which we can engage the targets. Over here, we can engage targets that are as far as 2,500m away," Yong added.

"This enhances the realism (of the exercise) and the training competencies of our crewmen."

The three-week live-firing exercise is also expected to cap off training of the 158 Armour Infantry (AI) instructors and trainees as specialists in the armour formation.

Prior to live-firing drills, the two armies exchanged information, inspected each others’ tanks and also worked together to execute tactical manoeuvres on the 12-lane range at the Nato-Bergen training area.

Singapore and Germany have also signed an agreement, which will enable the SAF personnel to double their training time in Germany from this year.