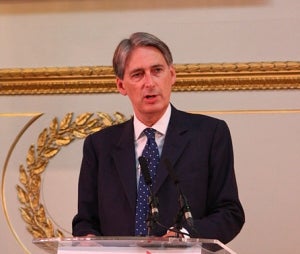 The UK Ministry of Defence (MoD) is planning to axe or merge entire British Army infantry and armoured units as part of programmed cuts to the armed forces, defence secretary Philip Hammond has revealed.

Hammond was quoted by The Telegraph as saying that the planned scale of reductions could not be achieved without loss of some units and those that fail to recruit their full complement of soldiers in the UK and make up their numbers from abroad are most vulnerable.

"The Army can't get smaller by 17% without losing some units," he said. "I can't say to you that there will be no loss of battalions in the infantry as we downsize the Army. We are looking at the options in the Army and the armoured corps."

About one in ten soldiers throughout the infantry currently come from foreign and Commonwealth nations, though some units possess larger foreign contingent compared with others.

Hammond did not name any units, but his comments led to speculation that Scottish infantry battalions such as the Black Watch, the Argyll and Sutherland Highlanders (5 Scots) and the Scots Dragoon Guards, a tank regiment based in Germany, may be abolished.

"At a time of constraint and reductions it would be wrong to ignore areas where there is under-recruitment and where reliance is on overseas soldiers."

The defence secretary said that this was already the case effectively as five battalions were amalgamated to form the Royal Regiment of Scotland under the 2005 reforms.

Scottish National Party (SNP) spokesman Angus Robertson MP said the units are being unfairly selected for cuts and brings into sharp focus the shocking decline of Scottish recruited units and the extent to which the UK Government is running-down Scotland's defence capabilities.

"The disbandment of these senior units would be an intolerable betrayal by the UK Government," Robertson added.

An MoD spokesman defended the proposal: "At a time of constraint and reductions it would be wrong to ignore areas where there is under-recruitment and where reliance is on overseas soldiers."