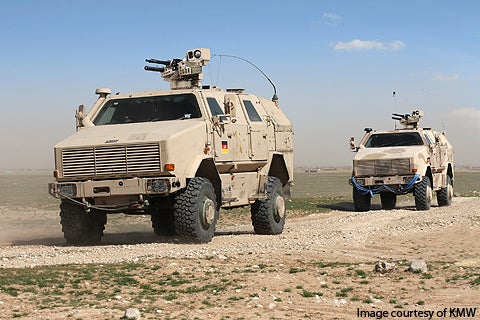 An unidentified source was quoted by Bild am Sonntag as saying that 30 Dingo 2 vehicles would be acquired under the €100m agreement, which also includes provision of operator training.

Saudi Arabia is eventually planning to buy a total of 100 MRAPs, the source said, while adding that the deal had already received a green light in principle from the federal government, but was subject to final approval from the Saudi Arabia’s National Security Council.

Riyadh has also expressed interest in acquisition of approximately 600-800 Leopard 2 main battle tanks (MBTs) under a €10bn deal, instead of the 200 to 300 tanks originally planned in 2011.

"The deal has already received a green light in principle from the federal government, but is subject to final approval from Saudi Arabia’s National Security Council.”

However, the sale was highly criticised by Germany’s opposition party and also by a few members of ruling centre-right coalition in the wake of pro-democracy uprisings throughout the Middle Eastern region.

Germany has repeatedly refused to sell armoured weapons to Saudi Arabia citing concerns over human rights and also due to its relationship with Israel.

It has already been deployed during operations in Bosnia, Afghanistan, Kosovo and Lebanon, and is currently operational with Germany, Belgium, Austria, Luxembourg, Norway and the Czech Republic.