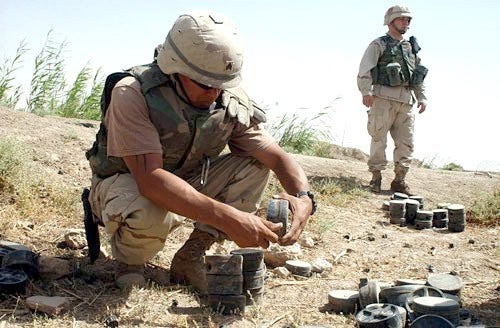 A joint venture between Samsung Electronics and Thales, Samsung Thales' vehicle-mounted land mine detector will be designed for efficient detection and removal of land mines left behind from wars worldwide.

"In addition, Novelda saves costs and time for developers by supplying development kits, Radar modules and software, and providing development support for the entire range of available chips."

Increased speed and high sensitivity combined with the ability to detect objects behind obstacles make the radar complementary or substitute for current technologies, including ultrasound, video and infrared sensors.

Other sensor applications offered by the radar across an array of sectors include stress and pulse monitoring, medical diagnosis involving heartbeat monitoring and 3D RF-imaging, as well as distance and road obstacle detection.

Image: A US Army personnel clears a mine field outside of Fallujah in the Iraq conflict. Photo: courtesy of US Army photo, by Spc Derek Gaines.