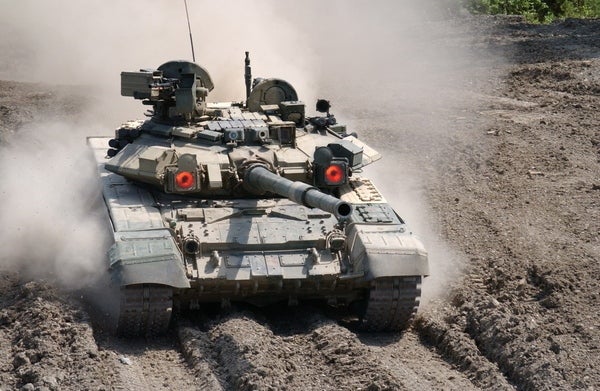 Russia is offering a full-scale model of its T-90S main battle tank (MBT) to the Peruvian Army in response to interest expressed by the service in the tank in 2012, Uralvagonzavod plant representative and former armed forces general Alexei Maslov has revealed.

Announced at the ongoing 2013 International Defense Technology Exhibition and Prevention of Natural Disasters (SITDEF PERU) exhibition, the tank is currently being showcased at the army’s headquarters in Lima, Peru.

Maslov was quoted by RIA Novosti as saying: "Given the genuine interest of Peru in purchasing T-90-type tanks, Uralvagonzavod is prepared to leave the tank in this country for testing after the exhibition is over."

Without disclosing the location of operational tests, Maslov said that Moscow had a good chance of selling T-90S tanks to Peru, which is expected to acquire between 120 and 170 tanks of the same class.

"Maslov said that Moscow had a good chance of selling T-90S tanks to Peru, which is expected to acquire between 120 and 170."

However, the tank is expected to be transferred to the 18th Tank Brigade, which is based in Fuerte General de División EP Rafael Hoyos Rubio (Rímac) for comparative tests against US M1A1 Abrams, Spanish Leopard 2A4s and Dutch Leopard 2E6s, as well as Ukranian T-64E and T-84 MBTs, as reported earlier by Armyrecognition.com.

This acquisition forms part of Project Ugarte, which seeks replacement of the land force’s ageing Russian T-55 tanks fleet. which was built between 1973 and 1978.

The third-generation tank is powered by a multifuel 1,130hp diesel engine with gas turbine injection, which enables it to attain a top speed of more than 60kmph on the road and up to 45kmph on rough terrain.