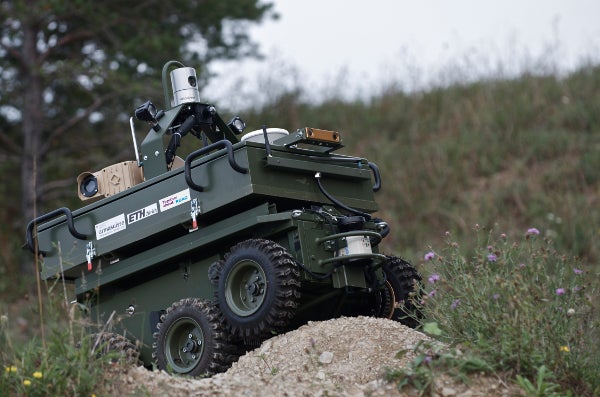 "RUAG is researching, developing and investing in this area with the aim of gradually becoming a UGV competence centre for the Swiss Army and other security forces," Breitmeier added.

Conducted by a group of specialists from the Federal Institute of Technology Zurich (ETHZ), as well as technical departments of the Swiss Defense Procurement Agency (Armasuisse) and RUAG, the ARTOR is a joint research project aimed at addressing the country’s public safety and security requirements.

“RUAG is researching, developing and investing in this area with the aim of gradually becoming a UGV competence centre for the Swiss Army and other security forces."

Both vehicles feature an electric propulsion system and weigh 250kg and 425kg respectively, with a maximum speed of more than 15km/h, and can be integrated with a range of standard payloads depending upon mission requirements.

Equipped with autonomous navigation capabilities, the ARTOR is also capable of distinguishing between static and moving obstacles, which enable rapid target identification, and can also be used for route or area clearance operations.

The company is providing a vehicle robotic kit featuring sensors, hardware and software, actuators, broadband radio system, as well as control and command equipment for the control console for the technology demonstrator.

Weighing 10,000kg, the demonstrator is a 5.5m-long vehicle capable of carrying a 3000kg payload, and is currently teleoperated in manned and unmanned modes.