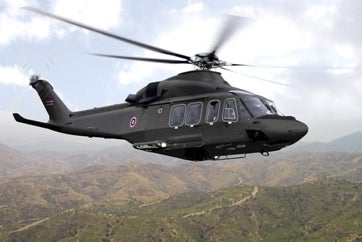 AgustaWestland has received a contract to supply its AW139 medium-twin utility helicopters to the Royal Thai Army.

The unspecified contract covers the delivery of two helicopters, along with a comprehensive maintenance and training package to assist army in conducting transport and utility operations throughout the country.

Commenting on the helicopter, AgustaWestland regional head Vincenzo Alaimo said: "We are confident this model, thanks to its unmatched performance, comfort and safety, has significant potential in Thailand in the future."

The deal marks adds Thailand to a growing list of armed forces to have acquired the AW139 for conducting a wide range of missions, including VVIP and government transport, utility, search-and-rescue (SAR), as well as homeland security operations.

"We are confident this model has significant potential in Thailand in the future."

Operated by a crew of two pilots, the helicopter is capable of transporting 15 passengers in different seating configurations at a cruise speed of 306kph, and features a baggage compartment that provides a 3.4m³ storage capacity.

The company has delivered 500 AW139 helicopters to date, out of total 650 ordered by approximately 170 customers from 50 nations worldwide.

Image: An AW139 utility helicopter during its flight. Photo: © 2010 AgustaWestland – A Finmeccanica Company.