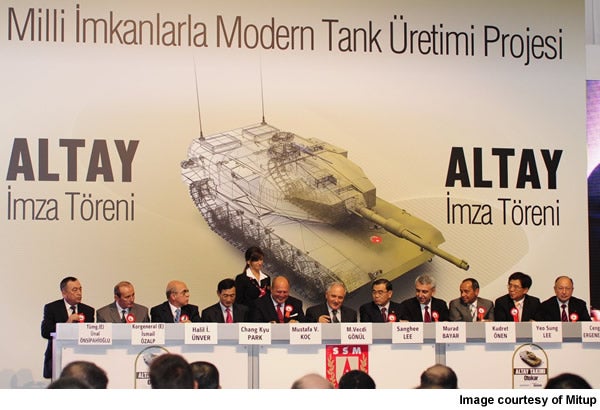 Developed under national main battle tank project, the prototypes demonstrated their mobility performance, including acceleration, maximum speed, side slope, suspension, as well as stabilisation track and off-road drive during the presentation.

Speaking about prototypes, Koc Holding Defence Industry Group head and Otokar Board chairman Kudret Onen said the first prototype had already covered more than 2,000km during tests to date, while the second will be used to evaluate the tank’s firing performance during coming months.

"By using the results that we gather from these two prototypes, we’ll manufacture the ultimate prototypes, test them, and bring ALTAY to perfection as the most modern and capable tank in the world," Onen added.

Koc Holding Board chairman Mustafa KOC said the Altay project will improve the Turkish defence industry’s land platform area in terms of design, development and manufacturing due to its investments, developing labour force and technical know-how.

"With its power to withstand possible threats of today and the future, Altay will further enhance the strength of our armed forces as the most modern battle tank in the world."

"With its power to withstand possible threats of today and the future, Altay will further enhance the strength of our armed forces as the most modern battle tank in the world," Mustafa added.

Otokar had received a $500m contract from Turkey’s procurement agency, Undersecretariat for Defense Industries (SSM), for design and development of four Atlay prototypes in July 2008.

Production of the remaining two prototypes is expected to start following completion of data validation gathered from testing of the first two prototypes, whereas Altay mass production is scheduled to start in 2015.

Turkey is planning to manufacture an initial batch of 250 Atlay tanks, and overall 1,000 in four separate lots of 250 units each, for use by the Turkish Land Forces Command (TLFC).

The Artillery and Systems Market in Turkey to 2025: Market Brief

The Armored Vehicles and MRO Market in the United States to 2025: Market Brief