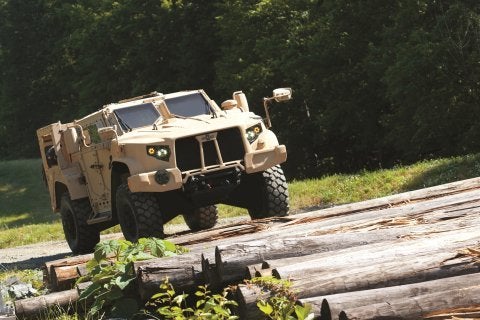 The US military has taken delivery of the first joint light tactical vehicle (JLTV) prototype from Oshkosh Defense for the US Government’s comprehensive testing and evaluation programme.

The delivery follows successful completion of the vehicle inspection by the Defense Contract Management Agency (DCMA) during an event in Oshkosh, Wisconsin, US.

Oshkosh is developing 22 JLTV prototypes as part of the programme’s $56.4m engineering, manufacturing and development (EMD) contract awarded by the US Army in August 2012.

”The Oshkosh JLTV solution we are now submitting for government testing transforms the concept of what a light vehicle can be – merging key design aspects of high-performance tactical vehicles and highly survivable combat vehicles. The result is a new level of protected mobility in a light platform,” Urias said.

"The prototypes include a four-door multi-purpose variant and two-door utility variant."

Manufactured on the company’s active manufacturing line, alongside its tactical wheeled vehicles (TWV), the prototypes include a four-door multi-purpose variant and two-door utility variant.

The company has offered its light combat tactical all-terrain vehicle (L-ATV) for the multi-billion dollar JLTV programme, which seeks to replace the US Army and Marine Corps’ existing and ageing high-mobility multipurpose wheeled vehicles (HMMWV) fleet, which have served in combat for more than 25 years.

Deliveries of all Oshkosh JLTV prototypes for the testing programme are scheduled to be completed this month.

The company will also deliver required training and support for the vehicles as they are accepted and validated by the government.

Lockheed Martin and AM General are the other two companies bidding for the JLTV contract.