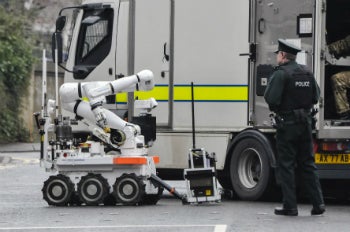 Northrop Grumman is planning to demonstrate the capabilities of its new unmanned explosive ordnance disposal (EOD) vehicle, known as CUTLASS, in daily live scenario-based tests during the forthcoming 2013 Counter Terror Expo at the National Hall in Olympia, London, UK.

First rolled out for The British Army at its unmanned ground systems production facility in Coventry, UK, in August 2012, the live tests will help the company to explore potential export opportunities for this capability into international markets.

"It is more dexterous, cost-effective and, as a package, four times faster than any other UGV," Roberts said.

"The vehicle is already in-service across the UK and has proven itself to be robust and capable in the most demanding environments."

Capable of accommodating a broad spectrum of payloads, sensors and tools, the CUTLASS is a six-wheeled, next-generation UGV designed for efficient detection and disposal of both vehicle-borne and improvised explosive devices from safer distances in all types of terrain and weather conditions.

“The vehicle is already in-service across the UK and has proven itself to be robust and capable in the most demanding environments."

Equipped with a three-fingered advanced gripper-equipped manipulator arm, the vehicle offers nine degrees of freedom for greater movement and agility inside limited spaces, and a high-level of control and dexterity to lessen property damage and preserve forensic evidence when teamed with a specialised sensing system.

As well as creeping along at deliberately slow speeds for sensitive operations, the vehicle can be accelerated to high-speeds to enable rapid travel according to requirements.

Around 80 CUTLASS vehicles were ordered by the UK Ministry of Defence (MoD) as a replacement for the Wheelbarrow UGV for conducting anti-terrorism operations around the world in December 2006.