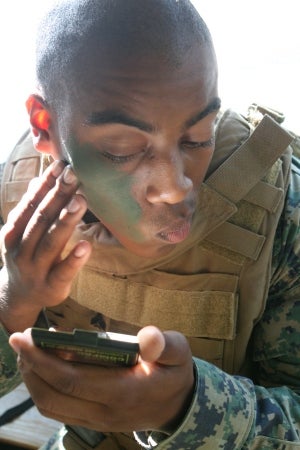 A new type of camouflage skin paint has been developed by University of Southern Mississippi researchers to safeguard soldiers from injuries and facial scarring caused by roadside bomb blasts and other battlefield explosions.

Created by polymer professor Robert Lochhead and colleagues, under funding support from the US Army’s Natick Soldier Systems, the face paint is designed to withstand temperatures as high as 600 degrees Celsius.

Speaking at the National Meeting and Exposition of the American Chemical Society, Lochhead said that the development of a camouflage material to protect soldiers against intense heat with 35% DEET, an insect repellent, was initially difficult.

"DEET also is flammable, so when the Department of Defence asked us to incorporate it, we didn’t think we could do it," Lochhead noted.

"The detonation of a roadside bomb or any other powerful explosive produces two dangerous blasts. First comes a blast wave of high pressure that spreads out at supersonic speeds and can cause devastating internal injuries."

However, the team proved successful in including DEET by encapsulating it in a hydrogel substance that prevents the insect repellent from catching fire.

Preliminary laboratory test have demonstrated the paint’s ability to protect skin for as long as 15 seconds, before its own temperature rose to cause mild first-degree burns, and in some instances, it even withstood the soaring heat for up to one minute, which may provide soldiers with sufficient time to run away from the blast site.

Lochhead said: "The detonation of a roadside bomb or any other powerful explosive produces two dangerous blasts. First comes a blast wave of high pressure that spreads out at supersonic speeds and can cause devastating internal injuries.”

"A thermal blast follows almost instantaneously. The thermal blast lasts only two seconds, but it can literally cook the face, hands and other exposed skin."

Following successful completion of experiments, the scientists are now planning to test the paint on multiple surfaces, with an aim to protect clothing, tents and other items, and even hair from burning.

The silicone-based waterproof paint is non-irritating to the eyes, nose and mouth, and is available in a range of camouflage colours that are suitable for day and night operations, while a colourless variant is also being developed for use by civilian firefighters and first responders.