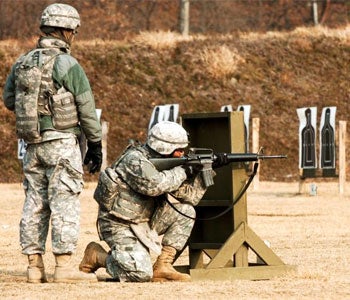 Meggitt Training Systems has been awarded a contract modification for the delivery of additional live-fire target systems in support of the US Army targetry systems (ATS) programme.

Covering the supply of more than 500 stationary and mobile infantry and armour units for three different range types, the $4.1m award follows a $7.9m contract secured by the company for ATS programme deliveries last month.

Range types include known distance, qualification training, and scout reconnaissance, while the previous contract involves delivery of around 1,100 infantry and armour units for installation across ten US military bases.

Pursued jointly by the Tank Automotive Command (TACOM) and the US Army Contracting Command (ACC), the ATS programme forms part of an initiative to deliver equipment for live-fire training ranges at US Army installations worldwide.

"Delivery of these targetry systems for the ATS programme ensures today’s soldiers are mission-ready."

Capable of developing and enhancing combat skills required to conduct infantry and armoured military exercises, and for participation in actual combat action against opposing forces, the training ranges are currently operational with the forces in the US, South Korea and Europe.

Originally awarded to five companies in October 2011, the indefinite-delivery indefinite-quantity (IDIQ) ATS programme contract has a maximum potential value of up to $475m over the next five years.

The systems delivered under the latest contract are scheduled to be fielded at Fort Riley in Kansas, US, in late-2013.