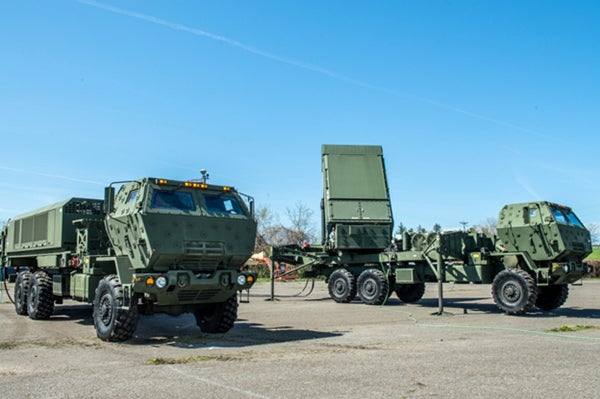 Carried out in preparation for the forthcoming dual-intercept trial, the test characterised the radar’s performance against a TBM-class target, and also demonstrated its 360° rotating mode capability.

During testing, the X-band radar detected the Lance TBM soon after its launch and maintained dedicated track mode until shortly before the ground impact.

”In the past few months, MEADS has successfully demonstrated radar cueing, interoperability with networked NATO systems, certification of the mode 5 identification friend or foe system, and acquisition and tracking of a TBM during the system’s first attempt,” Weidemann said.

MEADS international president Dave Berganini said: ”We are looking forward to showing the capability that MEADS radars and launchers can add as part of an integrated air and missile defence network.”

Equipped with element-level transmit / receive modules, the MFCR is a solid-state, active electronically steered array radar designed to provide commanders with accurate tracking and wideband discrimination and classification capabilities against short and medium-range ballistic missiles, cruise missiles and other air-breathing threats (ABT).

"We are looking forward to showing the capability that MEADS radars and launchers can add as part of an integrated air and missile defence network."

The radar serves as a node on the MEADS network through its plug-and-fight capability, and also features an advanced mode 5 identify friend-or-foe subsystem to support enhanced threat identification and typing.

Expected to be carried out in November 2013, the dual intercept test will see MEADS intercepting TBM and attacking ABTs at over 120°, demonstrating capabilities not provided by sectored defences.

The system is managed by MEADS International, which is a joint project between German LFK, MBDA Italia and Lockheed Martin.

Image: The MEADS MFCR radar successfully acquired and tracked a Lance TBM in a live test in New Mexico, US. Photo: copyright of Lockheed Martin Corporation.