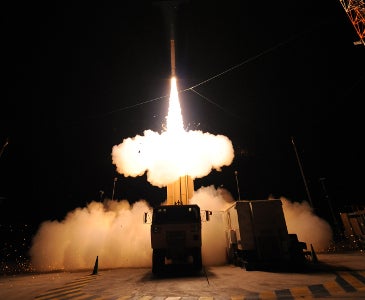 Lockheed Martin Space Systems (LMSS) has been awarded a contract from the US Missile Defense Agency (mda) for the supply of terminal high altitude area defence (THAAD) missile interceptors.

The $2bn deal is part of an existing THAAD production contract awarded to the company.

LMSS will supply a minimum of 42 THAAD interceptors under the production contract, which the US Government intends to combine with the foreign military sale of 96 interceptors for the United Arab Emirates (UAE).

The combination is to gain cost savings and the new UCA will cover the procurement of a minimum of 138 interceptors in total.

The US MDA had awarded a $1.96bn FMS contract to Lockheed for the supply of two THAAD missile interceptors to the UAE in December 2011.

"THAAD is a key element of the BMDS and is designed to defend the nation and its deployed forces and allies against ballistic missile threats of all ranges."

Developed by the MDA, the THAAD missile system is designed to intercept and destroy short, medium and intermediate ballistic missiles, using hit-to-kill technology and is capable of engaging ballistic missiles at both endo and exo-atmospheric altitudes.

THAAD is a key element of the BMDS and is designed to defend the nation and its deployed forces and allies against ballistic missile threats of all ranges during all phases of flight.

Work will be carried out at the company’s facility in Sunnyvale, California, US, with the final assembly to be performed in Troy, Alabama.

The contract has a performance period that extends from 4 June until 31 July 2018 and definitisation of the UCA is expected before 30 November 2012. MDA, THAAD Program Office will be the contracting activity.

Image: MDA and the US Army conduct an intercept test for the terminal high altitude area defense missile. Photo: courtesy of The Missile Defense Agency, US Department of Defense.