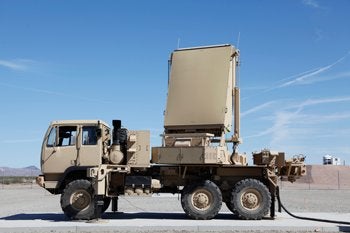 Lockheed Martin has received a firm fixed price contract from the US Army Product Manager for Radars (PdM Radars) for supply of its AN/TPQ-53 (EQ-36) Firefinder radar system to enhance the capabilities of soldiers.

The $881m contract has one $166m base year for producing 12 systems and two option years, which could yield up to 51 systems and also covers all training and testing support, including a limited user test (LUT) as well as initial operational test and evaluation (IOT&E).

PdM Radars lieutenant colonel Robert Thomas said the radar will bolster the level of protection for soldiers in the field, by expanding basic counter-fire radar capabilities in both 90 and 360 degree modes.

"This is a great example of the army and industry coming together to ultimately deliver a system that will greatly enhance situational awareness by providing the precise location of hostile indirect fire weapons," Thomas added.

Initial fielding of the 12 initial QRC AN/ TPQ 53 radars was completed by the army in July 2011 in Iraq and Afghanistan, and the remaining radars will be fielded during 2012-2014.