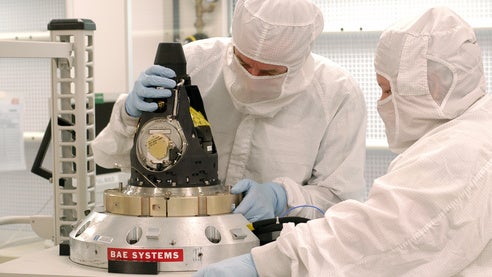 Under the terms of the initial $81m contract, a total of 143 IR seekers will be manufactured and supplied by the company to the THAAD prime contractor and systems integrator, Lockheed.

The company also secured $5.3m in initial contract funding for tooling and test equipment for accelerating the monthly production rate.

Commenting on the missile, Bae Systems THAAD programme manager Barry Yeadon said the weapon has scored nine-for-nine intercepts and successfully destroyed two separate targets during the most recent test firings that were carried out.

The seeker is capable of guiding the THAAD interceptor to its target by detecting IR radiation from the target missile and warhead, eventually leading to its destruction through direct hit-to-kill technology.

"The missile is also capable of engaging ballistic missiles at both endo and exo-atmospheric altitudes."

A total of 100 THAAD seekers have been delivered to date by the company to Lockheed.

Assembly, integration and testing of the IR seekers will be performed at the company’s facilities in Nashua, New Hampshire, and Lexington, Massachusetts, in the US, while the delivery schedule has not been disclosed by the company.

The missile is also capable of engaging ballistic missiles at both endo and exo-atmospheric altitudes.

Serving as a key element of the US Ballistic Missile Defence System (BMDS), THAAD is intended to defend the nation and its deployed forces and allies against ballistic missile threats of all ranges during all phases of flight.