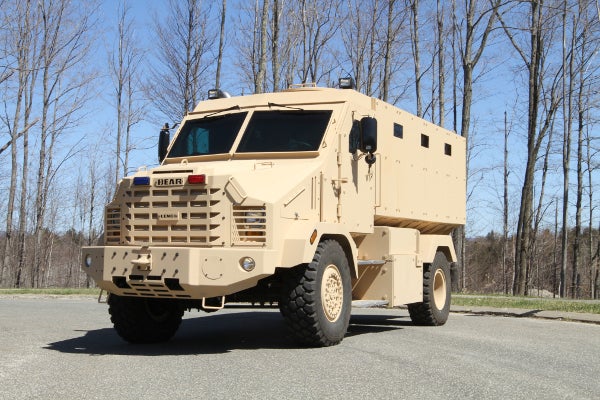 Lenco Industries has successfully completed underbody and side blast testing of its ballistic engineered armoured response (BEAR) 17-man troop transport armoured vehicle, at the US Army’s Aberdeen Test Center at Aberdeen Proving Grounds in Maryland, US.

Based on a Freighliner truch chassis, the BEAR is primarily designed for military and government personnel and international security forces operating in hostile environments across the globe.

Lenco’s vice-president, Len Light, said improvised explosive devices (IEDs) continue to serve as one of the most pressing concerns for military operatives and overseas diplomatic transport.

"We’re proud to provide a blast-resistant vehicle that has proven to outperform its military counterparts in protection and survivability," Light said.

"It can protect occupants from IEDs, grenade and close proximity mortar round attacks."

The vehicle’s modified V-hull, which is modelled after legacy mine resistant ambush protected (MRAP) vehicles, along with its armour package, optional blast seats and fire suppression system, can protect occupants from IEDs, grenade and close proximity mortar round attacks.

Apart from an optional ram bar on the front to breach doors, fences and other obstacles in an armed standoff situation, the blast-resistant vehicle can also be fitted with an array of communications and intelligence sensors based on customer requirements.

Available in either two or four-wheel drive, the vehicle is currently fielded overseas in hostile regions by the US government convoy teams and diplomatic security.