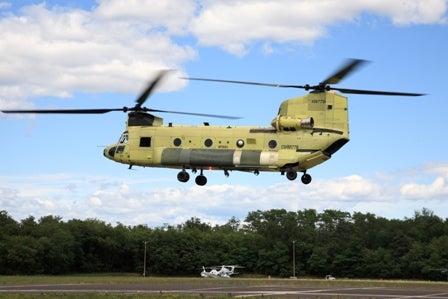 AgustaWestland has successfully completed the first test flight of the Italian Army‘s first ICH-47F Chinook transport helicopter at its facility in northern Italy.

Basic handling tests and main systems checks were carried out by the helicopter, which performed as expected during the 15 minute test flight.

Sixteen CH-47F Chinook helicopters were ordered by the Italian Ministry of Defence’s (MoD) General Directorate of Air Armaments (ARMAEREO) from AgustaWestland under a € 900m contract signed in May 2009.

As well as options for an additional four helicopters, the contract also includes a five-year logistic support service package.

AgustaWestland Italian Government business unit senior vice-president Alessandro Parrini said: "This maiden flight confirms that the strategic partnership between the company and the service is providing a significant contribution to the modernisation of the Italian Army helicopter fleet."

Scheduled to be operated by the Viterbo-based Army Aviation 1st Regiment, the ICH-47F helicopter is a customised variant of the CH-47F Chinook, and is designed to replace the army’s ageing 40 CH-47C Chinooks fleet.

"This maiden flight confirms that the strategic partnership between the company and the service is providing a significant contribution to the modernisation of the Italian Army helicopter fleet."

Powered by two Honeywell T55-GA-714A engines, the helicopter features a maximum all up weight (MAUW) of 23t, and will primarily be used for equipment and troop transportation, in addition to special support functions, disaster relief and firefighting missions in all weather conditions.

AgustaWestland serves as the prime contractor for the Italian ICH-47F programme having signed a joint industrial agreement with Boeing in July 2008, and is responsible for systems integration, drive systems production, final assembly and aircraft delivery.

The helicopter’s fuselage is manufactured at Boeing’s rotorcraft facility in Ridley Park, Pennsylvania, US, with the final assembly taking place at Vergiate plant.

The first aircraft will be handed over in early 2014, while all deliveries are scheduled to complete in 2017.