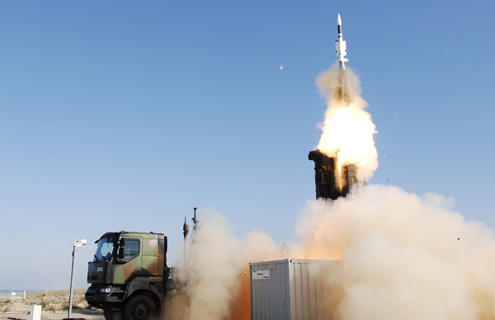 A target aircraft representative of a ballistic missile was successfully intercepted after a 300km flight by the missile during test flight at the French Defense Procurement Agency’s (DGA) missile launch test centre (CELM) in Biscarosse, France.

Performed by the fourth artillery regiment of Mantova (Italy) and the centre of military aviation experience (CEAM) of Mont-de-Marsan, the technical and operational evaluation is for testing the missile’s capabilities to counter a missile threat against NATO forces.

The missile has completed successful interceptions against the same threat type during testing with the French forces in October 2010 and November 2011.

Manufactured by Eurosam, an MBDA and Thales joint venture, the SAMP/T air defence system is designed to provide 360° protection against tactical ballistic missiles, cruise missiles, combat aircraft and unmanned combat air vehicles (UCAVs) over a range of 600km in the battlefield.

“The system features a network of advanced sensors and radars, including a Thales ARABEL 3D phased array radar, to increase effectiveness against targets at high speeds and altitudes."

The system features a network of advanced sensors and radars, including a Thales ARABEL 3D phased array radar, to increase effectiveness against targets at high speeds and altitudes.

Five SAMP/T batteries are being acquired for the regiment, with two already been delivered and the remaining three scheduled to be handed over in 2013.

Italy has also placed an order for one training version of the system that will be based at Sabaudia, south of Rome.