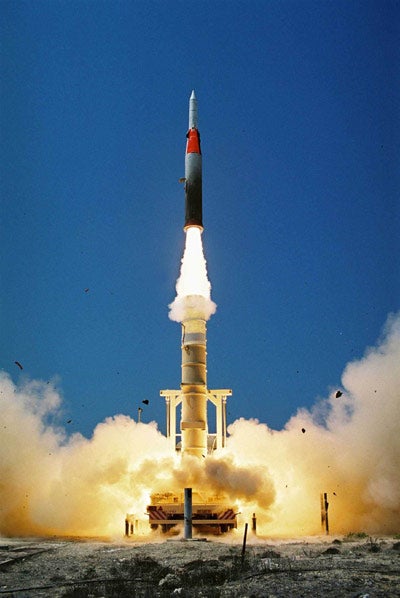 The Israeli Defence Ministry has completed testing of the Arrow 3 anti-ballistic missile system designed to protect the nation against long-range ballistic missile threats in the stratosphere.

A model of the interceptor missile was launched during the testing in order to check the propulsion system, as well as other tracking sensors. An upgraded version of the Arrow 2 defence system, Arrow 3 is designed to intercept long-range missiles including intermediate-range ballistic missiles at altitudes of over 100km as well as those equipped with non-conventional warheads.

Developed through a joint effort between the Israel Missile Defense Organisation and the US Missile Defense Agency since 2002, the Arrow 3 features capabilities similar to the systems present on the US Aegis destroyers and is able to intercept missiles at great altitudes and distances. Arrow 3 is capable of intercepting missiles from land as well as from sea, thereby improving the destroyer’s capabilities in terms of missile-interception altitude and its degree of operational flexibility.

The system features an Israel Aerospace Industries (IAI) and Boeing-developed exoatmospheric interceptor based on hit-to-kill technology and is propelled by an ordinary rocket motor equipped with a thrust-vectoring nozzle as opposed to most kill vehicles, which use liquid or gas propulsion. The advanced sensors to be integrated into Israel’s future multi-tier system include airborne electro-optical sensors deployed on high-flying unmanned aerial vehicles (UAVs) and future enhanced Green Pine radars, as well as the AN/TPY-2 radar already deployed in Israel.

Preliminary testing on the missile, conducted by the prime contractor IAI, began in 2011 and the development is expected to continue until the system is declared operational in 2014.