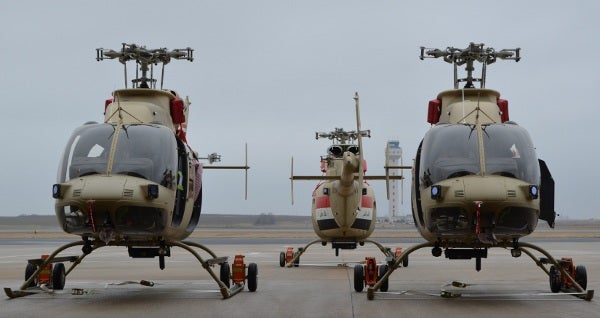 The US Army has provided three additional Bell Helicopter-built 407 Scout helicopters with associated services to the Iraqi Army Aviation Command.

Covering a total delivery of 24 armed Bell 407 helicopters, along with logistical support services, including pilot training, the contract was awarded in an effort to build an advanced, dependable capability in the Iraqi Army Aviation Command, eventually ensuring peace and security in the country.

US Army Security Assistance Command Central Command region operations deputy director Kevin Richardson said the delivery was a result of collaborative efforts between many organisations in and outside of Redstone Arsenal and the helicopters would be thoroughly evaluated prior to actual delivery to Iraq.

"We are building partner capacity, which means the Iraqi’s are building their own capability that allows them to perform operations that the US is no longer there to provide."

"We are building partner capacity, which means the Iraqi’s are building their own capability that allows them to perform operations that the US is no longer there to provide," Richardson added.

US Army Aviation and Missile Command source Kenneth Morgan said the helicopters would also be operated for internal requirements, such as patrol and security missions, as well as border security operations.

The first batch of three T-407 helicopters was delivered to the Iraqi Army in December 2011, to train pilots in operation and maintenance of the helicopters.