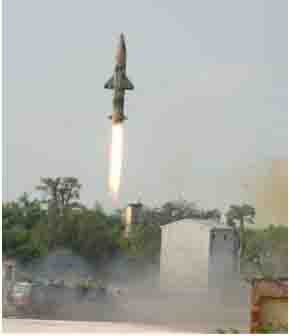 Fitted with an advanced high-accuracy domestically manufactured navigation and manoeuvring system, the missile achieved all the targeting and technical parametres set out for the launch, which was carried out as part of a regular training exercise, under guidance of the defence research and development organisation (DRDO) scientists.

During the terminal phase of the test launch, the missile was tracked by the DRDO-built radars, electro-optical tracking systems and telemetry stations located along the coast of Odisha.

An unnamed SFC spokesman said: ”Such successful training launches clearly indicate our operational readiness to meet any eventuality and also establishes the reliability of this deterrent component of India’s strategic arsenal.”

Meanwhile, ITR director, Prasad, was quoted by Indo-Asian news service as saying that the missile reached the predefined target in the Bay of Bengal with a high accuracy of few metres.

"The missile reached the predefined target in the Bay of Bengal with a high accuracy of few metres."

"The test was a hundred percent success," Prasad said.

Originally developed for use by the Indian Air Force, the missile has also been inducted into operational service with the Indian Army.

Image: the Prithvi-II missile being launched from Chandipur Range in Odhisa, India. Photo: courtesy of SFC.