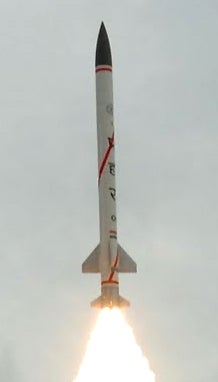 The Indian Ministry of Defence (MoD) is considering withdrawal of the domestically developed Prithvi surface-to-surface missile in an effort to boost its precision strike capabilities, Defence Research and Development Organisation (DRDO) chief Avinash Chander has announced.

Chander was quoted by Press Trust Of India as saying that the 150km-range Prithvi missile will be replaced with the newly manufactured quick reaction Prahar missile, which features more accuracy.

Following withdrawal, the tactical variants of Prithvi missiles are scheduled to be upgraded for long ranges uses, Chander added.

Fuelled by solid propellants, Prahar is a single-stage surface-to-surface guided short-range tactical ballistic missile currently under development by DRDO for destruction of both tactical and strategic targets.

With an operational range of 150km, the missile is expected to fill the gap between the 90km-range Smerch multi-barrel rocket launchers and Prithvi guided missiles that are effective over 250km to 350km ranges.

The system features six missiles that can be fired in salvo mode in all directions covering the entire azimuth plane.

Successfully test-fired from the Integrated Test Range (ITR) at Chandipur in Odhisa, India, in July 2011, the missile is scheduled to be delivered very soon for army user trials, and is expected to be inducted into the Artillery Corps following its acceptance.

Developed by DRDO as part of the integrated guided missile development (IGMD) programme, Prithvi is a tactical surface-to-surface short-range ballistic missile (SRBM) designed to accurately intercept targets, located at a distance of 350km.

"The system features six missiles that can be fired in salvo mode in all directions covering the entire azimuth plane."

Using an advanced inertial guidance system with manoeuvring trajectory, the 9m-long single stage liquid propelled missile can carry both conventional and nuclear warheads ranging from 500kg to 1,000kg payload, and is also capable of countering any anti-ballistic missile threat.

Originally developed for use by the Indian Air force (IAF), the missile has also been inducted into operational service with the army’s strategic force command (SFC).