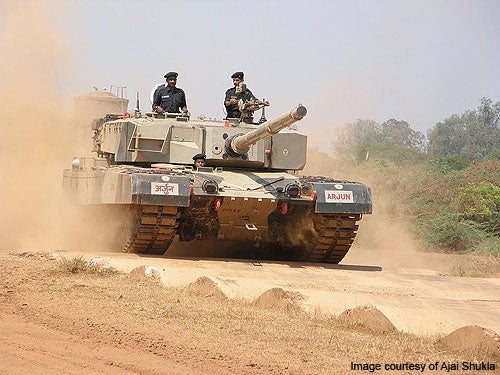 The Indian Army's third generation Arjun Main Battle Tank (MBT) will soon be equipped with a new Automatic Video Tracker, developed by Deepti Electronics and Electro-Optics (Delopt), which maintains a constant track on potential targets until they are destroyed.

Delopt director M R Sheshadri was quoted by BangaloreMirror.com as saying that the device collects intelligence inputs including location, distance, range and the data is sent to the gunner in less than a few milliseconds, who then fires a missile to destroy the target.

Sheshadri said the tanks are currently equipped with a manual thermal imager, which requires the navigator to constantly keep an eye on either the monitor or the view finder to locate enemy targets, a difficult process as both are on the move.

"With the thermal imager, the navigator can only track the enemy, but he cannot lock on to it for that perfect strike," Sheshadri added.

A prototype of the device was recently tested on Arjun tanks in the Pokhran range, Rajasthan, and a slightly modified version of the device is scheduled to be delivered to the army within a month.

"During trials, it detected fighter aircraft and missiles at a distance of 25 to 30 kms away. But for terrestrial targets, the army wanted us to limit it to 3km," said Sheshadri.

The tracker, based on the Line Replacement Units (LRUs) technique, utilises thermal technology to locate and home in on enemy tanks and vehicles and continuously tracks them until the targets are destroyed.

Sheshadri said although the device can locate a number of targets, the tracker can lock on to only one target at a time, further adding that the company is currently working to incorporate multiple target engaging facility in the tracker.