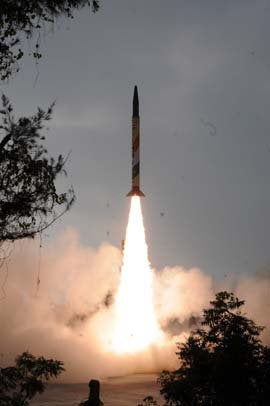 Launched from a road mobile launcher system, the missile flew for ten minutes and then followed a prescribed trajectory to reach the pre-designated target point in the Bay of Bengal.

Advanced radar and telemetry stations located along the coastline, with two naval ships stationed near the target point, tracked the missile’s trajectory during terminal phase of the flight.

“Such launches, as part of our training schedule, fully validates the crew’s operational readiness to undertake launches in diverse operational conditions.”

Monitored by senior scientists from India’s Defence Research and Development Organisation (DRDO), the launch successfully validated and demonstrated the efficacy of the missile, which was randomly drawn from the production lot for the manoeuvre.

An unidentified SFC spokesman said: "Such launches, as part of our training schedule, fully validates the crew’s operational readiness to undertake launches in diverse operational conditions, as also the reliability factor of our missile systems developed indigenously.”

Developed by the DRDO under the integrated guided missile development programme (IGMDP), the Agni-I is a 15m-long medium to intercontinental range ballistic missile (IRBM), capable of carrying both conventional and nuclear payloads at a speed of 2.5km/sec.

Having a payload capacity of up to 1t, the single-stage, road and rail mobile, Agni-1 has a range of 700km and also features an advanced high-accuracy navigation system.

Designed to bridge the gap between the short-range Prithvi and medium-range Agni II missiles, the weapon has already been inducted by the Indian Army, and also underwent test flight at the same location in July.