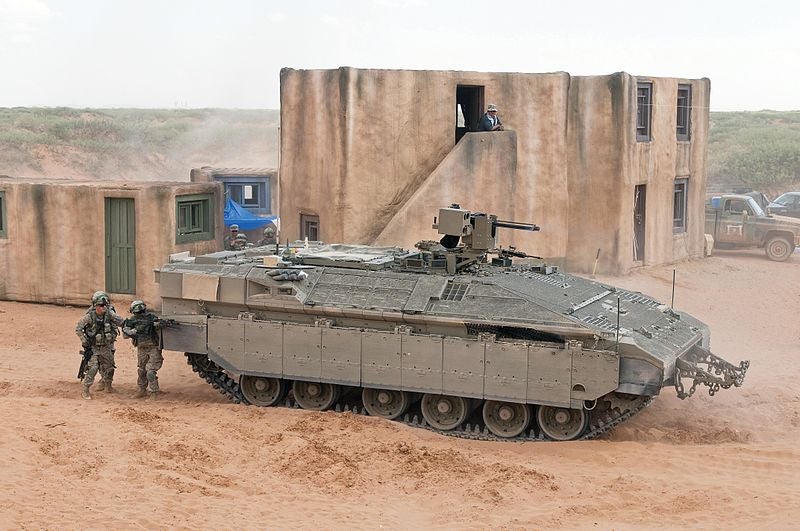 Conducted last week, the exercise validated the vehicle’s advanced technology, which will provide assistance in carrying out quick and secure operations in difficult and dangerous terrain.

Private Stav Globus, who tested the weapon systems of the vehicle, said that the heavy machine gun mounted on top of Namer’s roof can be controlled from inside, allowing the sniper to engage targets at various ranges.

Infantry Training School Namer Section head major Yitav Mazur claimed Namer was the ‘newest and most advanced armored combat vehicle for infantry in the IDF and in the world’.

"It is almost identical to the Merkava IV tank, except that they removed the 20t turret," Mazur added. "What is left is a strong tool, more stable and faster than ever."

"It is almost identical to the Merkava IV tank, except that they removed the 20t turret. What is left is a strong tool, more stable and faster than ever."

Derived from the Merkava Mk.4 main battle tank chassis, the Namer is capable of carrying crew of two and ten infantrymen, and features a Trophy active defence system (ADS) and an internal air-conditioning unit to continue operations in areas soiled by non-conventional weapons.

Armaments include either an M2 Browning machine gun or an Mk19 grenade launcher mounted on a Samson remote-controlled weapon station (RCWS), as well as a 7.62mm machine gun and 60mm mortar.

The IDF is also planning to develop command armoured recovery, and technical support vehicles, as well as ambulances and IFV variants of the Namer, which first entered operational service with selected units in early 2008.