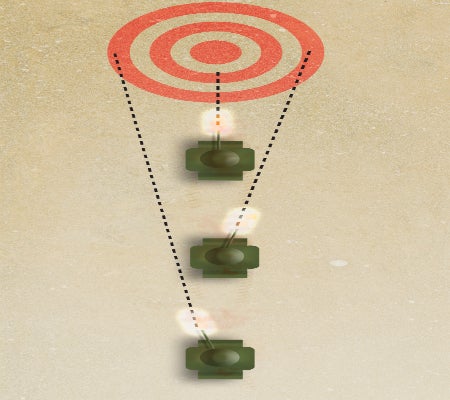 The Israeli Defence Forces’ (IDF) Artillery Corps is set to use an innovative warfare technique over the next few weeks with altered security regulations, which will provide enhanced tank firepower capabilities.

"As a result of cooperation within the Israeli Ground Forces, we were able to come up with a creative, outside-the-box idea that allows tanks to fire together in a row."

According to the change in security regulations, an entire company of tanks aligned in a straight line can attack targets simultaneously instead of the previous method of allowing only the first tank in the line to fire at the enemy.

The new shooting technique was also tested recently during the first operational test of the new regulations.

The line warfare technique will also be used under different combat scenarios in both urban and mountainous regions, while posed with numerous barriers, as well as anti-tank missiles.

According to the sources, some of the scenarios that the corps will prepare to use the technique include fighting in a region where the possibility for firing is higher.

Image: An entire company of tanks can fire in a straight line instead of just the first tank. Photo: courtesy of Israel Defense Forces.