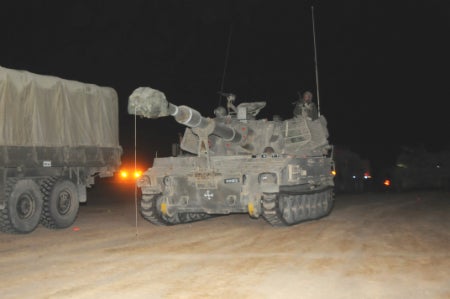 During the drill, which was conducted last week, the Battalion’s soldiers practiced providing artillery support against an onslaught of enemy commando forces, aimed to enhance their preparedness for similar unexpected incidents.

"This is an exercise on an unprecedented scale in this sector," said Shahar.

The Advanced Training battalion was established in November 2011, as part of the expansion plans of the Artillery Corps, enabling additional forces to provide artillery support against the enemy forces in the operational front.

Shahar said: "We were able to create the battalion though reorganisation within the Corps, and without using more funds.

"Our combat soldiers are given operational assignments in new artillery batteries, and the training batteries are manned by alternating soldiers who gain skills and experience they can later use in the field. Thus we reach a new level of operational readiness.

"This allows for more cooperation with the infantry forces as well. Our purpose is to provide the best artillery assistance possible and today we are able to do that."

The Israeli Artillery Corps also received approval for setting up the IDF’s first short-range rocket battalion in 2013, for launching rockets into populated areas, a mission that was previously only executed by the Israel Air Force (IAF).

Military sources were reported by Haaretz as saying that rockets with a range of 30km to 40km will be initially fired by the battalion while subsequently moving to long-range rockets over the years.

Israel Defense Spends on Training and Simulation: 2016 to 2024

Saudi Arabia Defense Spends on Training and Simulation: 2016 to 2024

The Soldier Modernization Market in Saudi Arabia to 2025: Market Brief

The Soldier Modernization Market in Israel to 2025: Market Brief