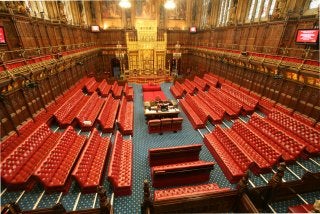 A Labour Party politician has urged the UK Government to advance talks with China on multilateral nuclear disarmament.

Speaking at the House of Lords on Thursday, Lord Browne of Ladyton said the challenges of discussing nuclear issues with China were daunting but necessary.

"We are committed to a world without nuclear weapons, but more needs to be done," said Browne. "We won’t make progress if we don’t take responsibility.

"China is currently going through military modernisation, with no clear indication of how this will shape their strategic capability, but we do know that they are delivering and modernising their nuclear arsenal," Browne added in a statement.

Over the past few years, the nuclear disarmament debate has been based on a consensus that humanity would seek the end of nuclear weapons. But there are concerns amongst the members of the UN Security Council that disarmament may ultimately lead to a more violence.

In China, there are fears over Washington’s growing missile defence architecture and its potential threat to the country’s own interests.

"We are committed to a world without nuclear weapons, but more needs to be done."

In September, the US announced that it would deploy a second radar system in Japan in an effort to reassure the Japanese, which has become concerned by North Korea’s nuclear capabilities.

Baroness Williams of Crosby, a former party spokeswoman for the Foreign and Commonwealth Office, said during the House of Lords debate that China had some reason to be concerned.

The Liberal Democrat peer said that the invention of the US’s MOAB, widely referred to as the ‘mother of all bombs’ and the introduction of nanotechnology into weapons was worrying, and asked the government to consider discussions about the possibility of bilateral no-first-use agreements between the P5.