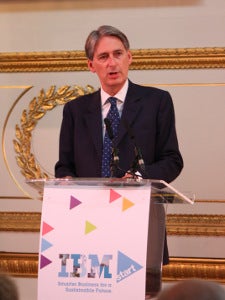 UK media reports have suggested that Hammond may confirm that the army will be reduced from the existing size of 102,000 to 82,000 by the end of 2020, and will have to increase its reliance on reserve forces, as well as private contractors.

He is expected to say that the army must be thinking innovatively about how combat service support is provided, using the skills available more systematically in the reserves and contractors.

Further news is expected to be announced on the UK Ministry of Defence's (MoD) plans to transform the role of reserve forces in frontline military operations by investing an additional £1.8bn over the next ten years.

"The future reserves must be structured to provide, as they do today, some niche specialists capabilities that aren't cost-effective to maintain on a full time basis - for example in areas of cyber, medical, or intelligence," Hammond is expected to say to delegates.

According to Hammond, restructuring the British army will 'rethink the way we deliver every aspect of military effect in order to maximise capability at the front line'. He will go on to add: "Some units inevitably will be lost or will merge."

"Some units inevitably will be lost or will merge."

"There is no question of abandoning the regimental system. But that does not mean that we can avoid difficult decisions as the army gets smaller.

"The integrated army concept means that light infantry battalions will be reinforced on deployment through a permanent partnership with reserve battalions."

Despite defence officials maintaining that no final decision has been taken by the MoD on axing which regiments and other units, it is widely predicted that some Scottish regiments, including the Black Watch, could be abolished.

The MoD's restructuring effort is part of plans set out in the 2010 Strategic Defence and Security Review (SDSR).