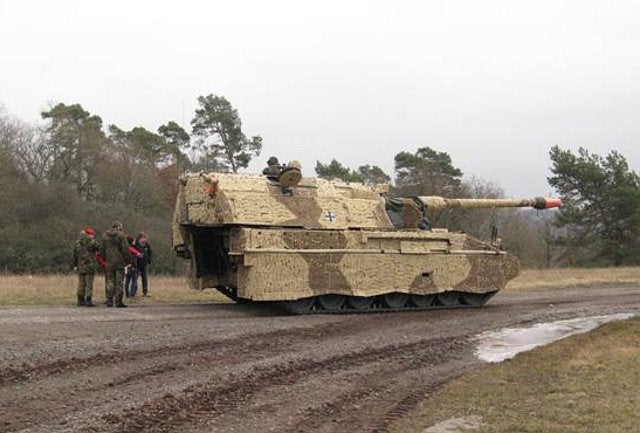 The German Army‘s Panzerhaubitze 2000 A2 self-propelled howitzers employed by the International Security Assistance Forces (ISAF) in Afghanistan will soon be equipped with a Mobile Multispectral Camouflage (MMT) system.

The decision follows a live firing test of the prototype camouflaged howitzers conducted by Bundeswehr Artillery School in Idar-Oberstein, Germany from 16 to 20 January 2012, during which the system survived a total of 74 fired rounds without taking damage.

The Bundeswehr Technical Centre for Protective and Special Technologies (WTD 52) is expected to authorise the MMTs for service use on howitzers following the successful trials of the prototype.

The camouflage systems have been developed by Saab-Barracuda in collaboration with WTD52, which will also provide technical support to the Army during the camouflage equipment integration process.

The first experimental prototype of the PzH 2000-adapted MMT was tested for fit, durability and compliance with the Road Traffic Licensing Regulation by the Bundeswehr Technical Centre for Automotive and Armoured Vehicles (WTD 41) in Trier, Germany in 2011.

Minor defects discovered during the driving tests were restructured immediately.

Employing a combination of camouflage materials and signature adaptation properties including visual and near-infrared protection, thermal and radar protection, the MMT system is designed to safeguard vehicles during combat and while on the move.

The MMT equipment features heat reduction systems that lower the internal temperature of the crew compartment, thereby extending the endurance of both personnel and electronic equipment.

The system provides protection against radar reconnaissance and homing missiles in the range of 1-100 GHz and can also be integrated with a Ballistic Protection System for improved blast and shrapnel protection.

The Panzerhaubitze 2000 is a 155mm self-propelled howitzer used by German ISAF troops in Afghanistan since the beginning of June 2010.