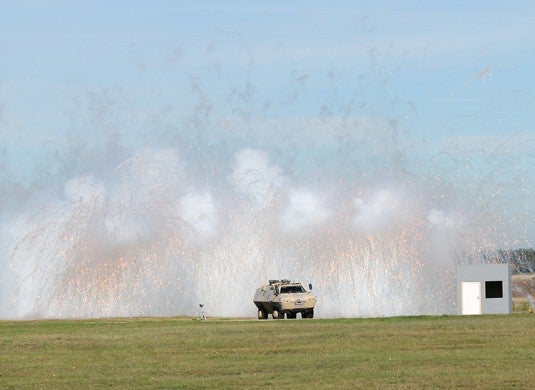 Rheinmetall Defence has been awarded a contract for supply of its rapid obscurant system land (ROSY_L) smoke protection system to boost protection of the German Army‘s ground vehicles.

Systems delivered under the contract will be installed onboard Bundeswehr’s 500 lightweight wheeled and logistical vehicles and weapon stations, in an effort to bridge a special capabilities gap during deployed missions.

Fully qualified by the BAAINBw, ROSY_L is an advanced smoke protection system designed to safeguard military and civilian vehicles’ crew and passengers from unexpected attacks and ambushes, especially during reconnaissance patrols or convoy transport.

Equipped with a manual control unit and from one to four ROSY launchers per vehicle, the basic system can be easily mounted onboard vehicles using a one-click adapter, and can generate dynamic smokescreens and spontaneous, large-area and multispectral interruption of the line of sight (LOS) within one second for protection of even moving vehicles.

"The basic system can be easily mounted onboard vehicles using a one-click adapter."

As well as from ensuring 360° protection from stream and wave attacks, ROSY_L is also capable of efficiently countering all TV, EO, IR, IIR, laser and semi-automatic command to line of sight (SACLOS) guided weapons due to its integrated IR jamming and decoying capabilities.

The modular system can support direct linking to the sensor suite of the carrier vehicle’s computer systems, and also enables individual selection and triggering of ammunition variants, allowing optimum positioning of smoke screens.

Expected to make significant contribution to improving force protection in Afghanistan, the system has also attracted a strong interest from customers from Scandinavia, the Benelux states, Russia and Eastern Europe, as well as North Africa and the Middle East.