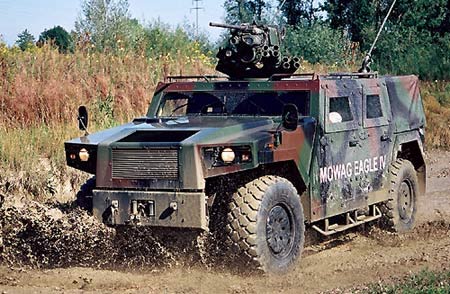 The contract also comprises an option for the purchase of additional 76 vehicles.

An upgraded version of the already in-service Eagle IV fleet, Eagle V has a higher payload capacity with increased crew protection at the same level of mobility.

Due to the modular protection system, the Eagle V offers high level of protection against ballistic threats, mines, and IEDs.

The vehicles under the order will be jointly manufactured in Kreuzlingen, Switzerland, and Kaiserslautern, Germany, and deliveries will roll out in 2013 and continue throughout 2015, if the option for 76 vehicles is exercised.

Eagle V demonstrated high-agility, tactical mobility, survivability and suitability required for the entire mission spectrum during testing by the Bundeswehr at its grounds.

The PCV can be used for several missions with modular add-on kits and with a substantial payload capability, it can meet the requirements of future.

Image: The Eagle IV is built on the DURO chassis with a payload increased to 2,400kg. Photo: file image.

The Military Rotorcraft Market in Germany to 2025: Market Brief