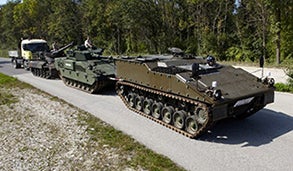 The MTR had its gross vehicle weight (GVW) originally set at 30t for the trials, but successfully towed 92t train weight more than 300km, demonstrating the SV’s ability to offer required full-load powerpack performance for addressing its expected growth path in the next 30 years.

The additional 62t load was provided by three towed vehicles, which included two military AFVs, a 28t ULAN PT5 and an 18t SK105 light tank, with a 105mm cannon, as well as a truck ballasted to 16t.

Conducted to provide proof-of-design and de-risking before the main trials programme, the testing highlighted the SV’s automotive systems capabilities, including tracks, wheels, suspension, engine, gearbox and cooling group to deliver performance, and the capability of SV Recovery variant to tow all other existing UK Army vehicles.

"The MTR had its gross vehicle weight originally set at 30t for the trials, but successfully towed 92t train weight more than 300km."

Trials also confirmed the SV’s ability to withstand extreme environmental operating temperatures, which could prove critical during operations in high-ambient temperatures at higher altitudes and also while climbing steep gradients.

GDELS is now planning to conduct a series of operational and tactical (O&T) mobility trials on the MTR with increasing GVWs to demonstrate its ability to reach the mandated maximum GVW of 42t for meeting stringent mobility requirements of the SV programme.

Following completion of O&T trials in late 2012, the MTR will also undergo a rigorous accelerated life testing (ALT) phase, which is designed to simulate pre-defined battlefield missions at the company’s test facilities in Seville, Spain.

The UK Ministry of Defence (MoD) awarded General Dynamics the SV contract in March 2010 for delivery of up to 580 units of Scout and common base platform variants of its Austrian-Spanish cooperation development (ASCOD) vehicle, followed by a £500m award for demonstration of seven prototype vehicles in July the same year.

SV represents tracked segment of the MoD’s future rapid effect system (FRES) programme, which aims to deliver a fleet of more than 4,000 AFV’s to the UK Army.