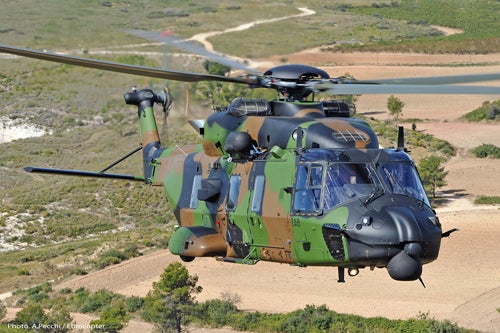 Carried out at an undisclosed location, the trials enabled the helicopter’s maximum take-off weight to be uprated to 10.6t, while additional trials, which are planned for March 2014, will lead to the helicopter’s clearance for shipboard missions.

The helicopter’s initial operational capability (IOC) is planned for mid-2014, when four NH90s will be available for operations.

The French Army has to date taken delivery of three of the total 34 NH90 helicopters ordered by the French defence procurement agency from NH Industries in December 2008, along with an option for an additional 34 aircraft, to help replace the army’s ageing SA 330 Puma helicopters fleet.

The helicopters are scheduled to be transferred along with their operational crews from the training and induction centre at Cannet des Maures to their new unit, the 1st Combat Helicopter Regiment based in Phalsbourg in eastern France, in December 2013.

"Also known as Caiman, the next-generation helicopter can also be used to perform casualty and medical evacuation."

Around 27 NH90 Nato frigate helicopters (NFH) were also ordered by the French Navy to replace its Lynx and Super Frelon helicopters, which perform anti-submarine and anti-surface warfare missions.

The helicopters have been ordered by other NH90 members, including Australia, Belgium, Greece, Norway, Oman, Sweden, Spain, Finland and Italy.