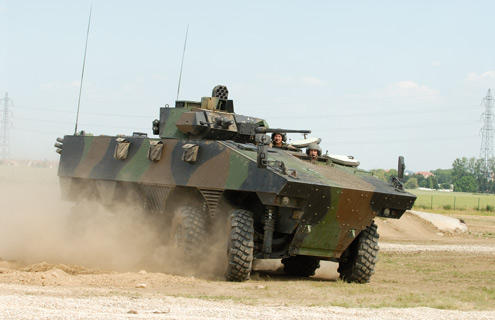 The VBCI vehicle crew, equipped with the FELIN system, can recharge the batteries of onboard power systems, as well as help them improve dismount operations preparation by providing capabilities for using communication equipment from inside the vehicle.

Manufactured by a consortium of Nexter Systems and Renault Trucks Defense, the VCBI is a wheeled 8×8 infantry fighting vehicle designed to safeguard infantry units against a broad spectrum of ballistic threats, such as improvised explosive devices (IEDs) and rocket-propelled grenades (RPG) in the battlefield.

Capable of accommodating 11 soldiers and their associated kits in its infantry combat version, the vehicle entered into operational service with the French Army as a successor to the AMX10P vehicle in 2008.

A total of 445 VBCI vehicles have been developed by the company out of an ordered 630, with the final vehicle set for delivery by 2015.

"FELIN is a high-tech integrated infantry suite chosen by the French Army for all its infantry units as part of its soldier modernisation programmes."

Built by SAGEM, FELIN is a high-tech integrated infantry suite chosen by the French Army for all its infantry units as part of its soldier modernisation programmes.

Designed to improve mission readiness of the dismounted soldier, the system offers enhanced protection, observation, command, control, computers, communications and intelligence (C4I), weapons use, as well as mobility and support.

The suite has its first foreign deployment in December 2011 in Afghanistan; it features communications and information systems, combat gear, day/night sights for individual and crew weapons, day/night-vision and observation equipment, as well as a protective vest.

All VBCIs are scheduled to be altered to support the FELIN system and the transformation process could either be directly on the vehicles currently under production, or through retrofit in regimental workshops for already developed vehicles.

The Body Armor and Personal Protection Market in France to 2024: Market Brief

The Artillery and Systems Market in France to 2025: Market Brief