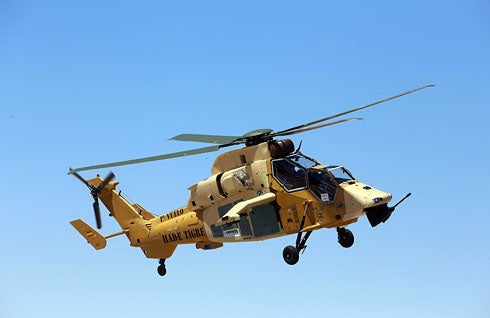 Entitled HAD/E-5002, the helicopter has been designed, manufactured and assembled by multiple Spanish companies at the Albacete facility, under the supervision of Eurocopter Spain.

Specifically, the companies included ITP, which assisted in the design and production of the upgraded engines, whereas Indra, Amper, Elimco, Aernnova, Technobit, Desarrollos Mecánicos de Precisión (DMP), Sacesa, and Celéstica were primarily responsible for components, systems and equipment development.

Eurocopter Spain Tiger programme manager Juan Luis Cordero said the test flight of the Tiger HAD/E helicopter represents a significant achievement for both the company and the Tiger programme.

”The assembly of this helicopter was made possible thanks to a significant investment in both industrial and human resources, and also to the close coordination with other entities in the group,” Cordero said.

"The Eurocopter Tiger is a two-seat attack aircraft designed to conduct precise day and night surveillance."

The helicopter is expected to enter service with the Spanish Army’s Fuerzas Aeromóviles del Ejército de Tierra (FAMET) unit to supplement the service’s existing six French-assembled Tiger HAP/E helicopters missions, including those in Afghanistan, by the end of 2013.

Assembled at Eurocopter’s facility in Marignane, France, the first prototype, designated HAD/E-5001, has been undergoing the certification and qualification flight campaign since 2010.

Available in several versions, including hélicoptère d’appui protection (HAP), unterstützungshubschrauber (UHT) and armed reconnaissance helicopter (ARH), the helicopters have been used in combat in Afghanistan, Libya and Mali, since their introduction into service in 2003.

A total of 206 helicopters have been ordered by Germany, France, Australia and Spain.