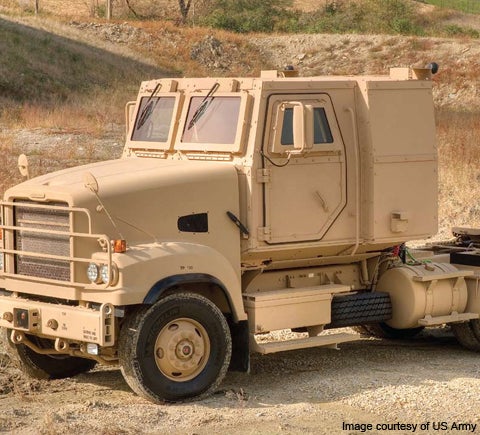 Fidelity Technologies has been awarded a contract for delivery of its B-Kit, add-on armour (AoA) systems for the US Army’s line of heavy tactical vehicles (FHTVs).

Awarded by the army’s Tank and Automotive Command (TACOM), the $200m contract covers production and delivery of unspecified B-kits by the company’s military and aerospace (M&A) manufacturing division.

The kits are scheduled to be installed onboard the army’s Oshkosh Defense-built heavy expanded mobility tactical truck A4 (HEMTT A4), palletised load system A1 (PLS A1), HEMTT A4 TAM, as well as the M915A5 military line-haul tractor truck fleet.

Fidelity president David Gulati said the contract provided the company with an opportunity to further demonstrate its core competencies in response to varying customer requirements.

"By providing competitive pricing, rigorous quality controls and lean manufacturing processes, Fidelity is constantly expanding its product offerings and solutions that directly address the needs of the warfighter," Gulati said.

"Fidelity is constantly expanding its product offerings and solutions that directly address the needs of the warfighter."

Readily stored, applied or removed by troops according to mission requirements in the battlefield, the kits enhance troop protection from multiple threats, including improvised explosive devices (IED), mines, and small-arms fire, depending on their intensity during convoy and patrolling operations.

Full-scale production under the contract is expected to start during the third quarter of 2013, while deliveries are scheduled to continue over the next five years.

Image: The M915A5 line-haul tractor truck of the US Army. Photo: courtesy of US Army.