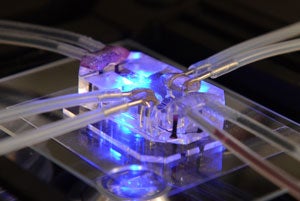 Harvard University’s Wyss Institute for Biologically Inspired Engineering has received a contract from the US Food and Drug Administration (FDA) for assessment of medical countermeasures for acute radiation syndrome (ARS) treatment.

Awarded through a broad agency announcement (BAA) for the advanced research and development of regulatory Science, in the area of supporting medical countermeasures development to protect national health and security, the $5.6m contract covers supply of Wyss Institute’s organs-on-chips technology.

Organs-on-chips are microchips designed to replicate the functions and interactions between the living tissues present in living organs, such as the lung, heart and intestine.

The chips will be used by Wyss Institute scientists to develop radiation damage models in lung, gut and bone marrow, for testing candidate medical countermeasures for ARS, with the aim to obtain valuable information for facilitating development.

”It holds enormous promise for improving our understanding of new medical countermeasures, particularly when it is unethical or unfeasible to conduct efficacy studies in humans, and when available animal models have limited use in accurately predicting human response,” Borio said.

"ARS is an illness affecting a combination of organs following exposure to ionisation radiation, resulting from a nuclear or radiological incident."

Also called radiation poisoning, radiation sickness or radiation toxicity, ARS is an illness affecting a combination of organs following exposure to ionisation radiation, resulting from a nuclear or radiological incident, over a short period of time.

Despite posing complex scientific challenges, development of medical countermeasures for ARS treatment remains a high-priority for the US government.

The involvement of several organ systems makes it difficult to study candidate medical countermeasures that target the radiation effects on one specific organ system in animal models.

In addition, certain candidate medical countermeasures cannot be effectively studied in animal models as their activity is specific to human beings, which are expected to be addressed by Wyss Institute’s organs-on-chips technology.