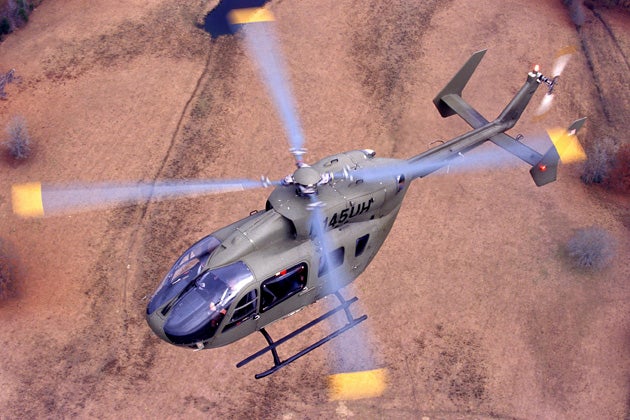 Eurocopter has been awarded a contract for supply of its EC645 T2 light utility helicopters (LUH) to German Special Forces Command (KSK).

Awarded by the German Federal Ministry of Defence (MoD), the €194m contract covers deliveries of a total of 15 EC645 T2 helicopters along with related equipment packages to support KSK’s special operations missions.

Speaking during the contract signing ceremony, Eurocopter Germany CEO Wolfgang Schoder said the helicopter is based on the EC145 helicopter, more than 270 of which are already operational with the US Army.

"This helicopter is an economical, low-risk and quickly available solution to carry out missions for special forces that has already won out several times against international competition," Schoder said.

"This helicopter is an economical, low-risk and quickly available solution to carry out missions for special forces that has already won out several times against international competition."

Equipped with dual-channel full authority digital engine control (FADEC), a modern digital cockpit with full night-vision, a four-axis autopilot, the helicopter can strategically be airlifted in an Airbus A400M military transport aircraft, and quickly readied for missions upon arrival in the theatre of operations.

With a 3.7t maximum takeoff weight, the helicopter is also expected to provide the MoD with an opportunity for increased synergies, as the German Army Aviation School has been using EC135 helicopter fleet for pilot training for many years.

Contract deliveries are scheduled to start in late 2015 and complete by the middle of 2017.

Image: The EC645 T2 LUH is based on the EC145 helicopter. Photo: © Eurocopter/Jerome Deulin.