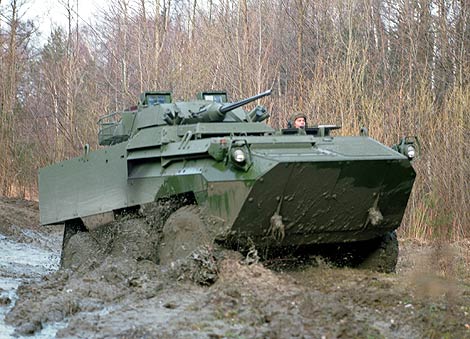 Elbit Systems has received two separate contracts from the Israel Ministry of Defense (IMOD) and a European army for the supply of Lightweight Weapons Stations (LWS) for armoured military vehicles.

Under the $11m contract, the company will produce and supply 7.62mm, 12.7mm and 40mm LWS to the Israeli Army as part of the upgrade process of the Israel Defense Forces' (IDF) lightweight weapons armoury.

The LWS will be integrated into the IDF's armoured personnel carriers (APCs) and armoured fighting vehicles (AFVs).

The 12.7mm remote-controlled weapons station-medium (ORCWS-M) is a lightweight, fully overhead weapon station that employs dual-axis stabilisation to provide vehicles with a first-round hit probability as well as simultaneous engagement of static and moving targets.

The station is equipped with a day camera, a thermal night vision camera, a laser range-finder and an optional searchlight for long-range observation and automatic target tracking in all weather conditions.

The 7.62mm ORCWS is a low-weight, fully stabilised weapon station comprising 7.62mm machine guns and a sensor package, and can be installed onto a range of armoured fighting vehicles, main battle tanks and support vehicles.

Deliveries under the contract will be completed in 18 months.

Under the $10m contract with a European army, the company will supply 12.7mm LWS for installation onto Pandur 6x6 vehicles.

The Pandur II 6x6 is an armoured personnel carrier capable of carrying a 12 crew members including a driver, gunner, and commander with six fully equipped troops, and can be armed with weapons up to a calibre of 90mm.

The vehicle provides protection against 7.62mm armour-piercing rounds and is readily transportable in roll on or roll off mode by Lockheed Martin Hercules C-130 aircraft.

Deliveries under the contract will continue for one year.

Image Caption: The Pandur II 6x6 can be armed with weapons up to a calibre of 90mm.