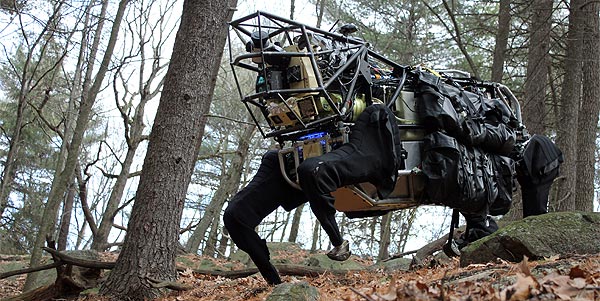 During the exercise the robot, dubbed AlphaDog, demonstrated its ability to follow the soldier using its sensors to distinguish between trees, rocks, terrain obstacles and humans.

"Based on DARPA’s previously designed four-legged robot called BigDog, the LS3 is smarter and stronger than its predecessor."

Based on DARPA’s previously designed four-legged robot called BigDog, the LS3 is smarter and stronger than its predecessor, which was able to carry 100lbs and also served as an auxiliary power source that soldiers can use to recharge batteries for handheld devices during patrols.

The robot will now undergo an 18 month platform-refinement test cycle, beginning in July 2012 to ensure its ability to support dismounted squads of warfighters before it is deployed in a field exercise with the Army and US Marines Corps.

The LS3 will continue to be refined during this period and will ultimately be made capable of carrying 400lbs of squad gear a distance of 20 miles within 24 hours without refuelling.

The robot’s vision sensors will be tested and refined to ensure that it can properly detect obstacles and autonomously correct its course as required and hearing sensors will be added to help LS3 follow verbal commands from soldiers.

DARPA programme manager Army lieutenant colonel, Joe Hitt, said: "LS3 seeks to have the responsiveness of a trained animal and the carrying capacity of a mule."

The highly mobile LS3 was under joint development with Boston Dynamics since 2010, and is being built to reduce the load on soldiers which has become a major point of emphasis for defence research and development due to negative impact it creates on battle readiness.

Hitt added: "If successful, this could provide real value to a squad while addressing the military’s concern for unburdening troops."

As the BigDog all-terrain robotic dog, developed by Boston Dynamics, enters extensive testing and development with DARPA, Liam Stoker analyses what makes the system unique and how it intends to reduce the burden on dismounted warfighters.

Argentina Defense Spends on Training and Simulation: 2016 to 2024

South Africa Defense Spends on Training and Simulation: 2016 to 2024

South America Defense Spends on Training and Simulation: 2016 to 2024

Elbit Systems registers $1.34bn in revenue in third quarter of 2022